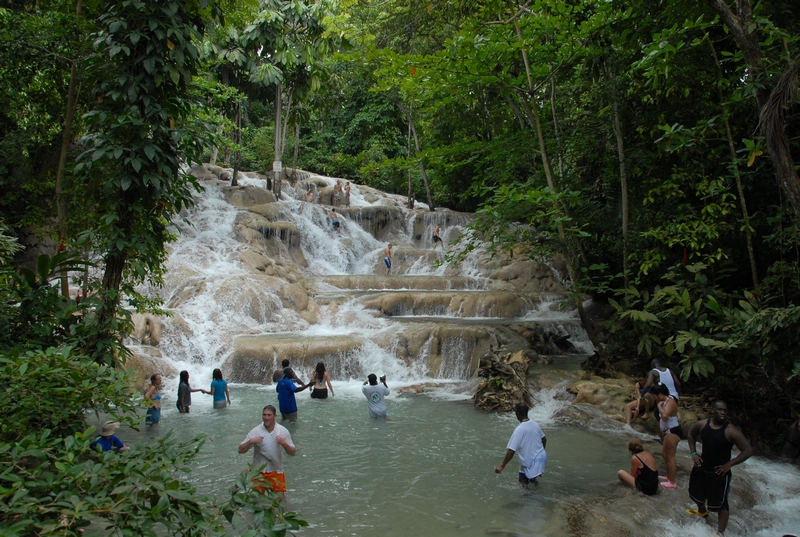 On my recent trip to Ocho Rios, Jamaica I got the opportunity to go on a day trip to the Dunn’s River Falls.  I booked the getaway through my airline (Sunwing) which was a group called “Cool Runnings” after the bobsledding team. It was a good trip, and the crew was great, but I found out that I could have booked the same trip through the tour provider right on site at the resort (Riu Ocho Rios).  Then I would have boarded right at the resort instead of a 20 minute bus ride each way.

We took a bus to the town of Ocho Rios, where we got on a catamaran.  The crew took us out on the water for about 10 minutes before anchoring by a reef and allowing us to go snorkelling.  I am still new to snorkelling, but I had just gotten a new mask and snorkel from the london scuba centre, and was keen to try it out.  The mask fit great, and the closed snorkel was a lot easier to use than the ones that had been provided by resorts to me in the past.

After our snorkelling we went to the falls, where we were separated into groups of around 30 people and we started our ascent up the falls.  The falls were beautiful and a more difficult climb then I had imagined. Easy enough for someone in decent health, but still surprising that you would be able to climb up a waterfall.  Could not help but wonder if anyone ever slips and falls.  There were spots along the way where you could either sit under the falling water, or slide into a pool of water.

I should have had my action cam on the entire climb, but I am still new to using it and I had it in my pocket most of the way.  You definitely need both hands as you climb and balance yourself. I did get some footage which I combined together into a short movie.

On the way back to the bus, the party started, with dancing on the catamaran, especially on the front.  Drinks were flowing and it was good, as the wind picked up and the ocean got rather rough on the return trip.  It turned out to be the last day that week that the catamaran ran due to high wind.